olena
Welcome to my humble corner in the world of TS1 custom content!

Here is a new part of Modern Collection series. Once again in black, red and white: 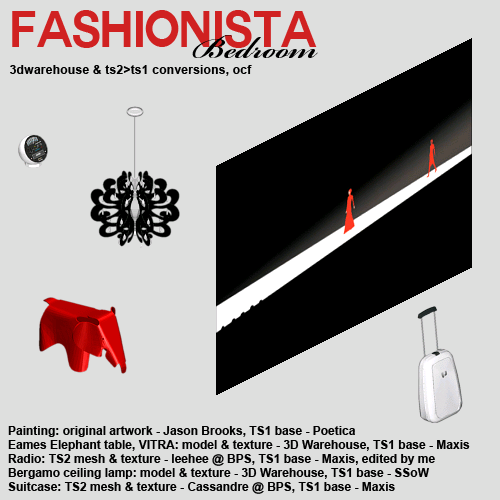 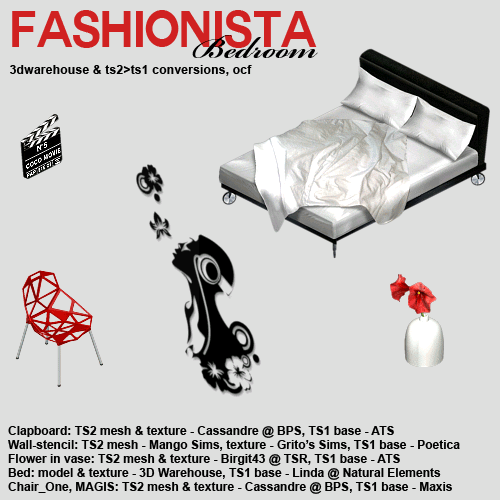 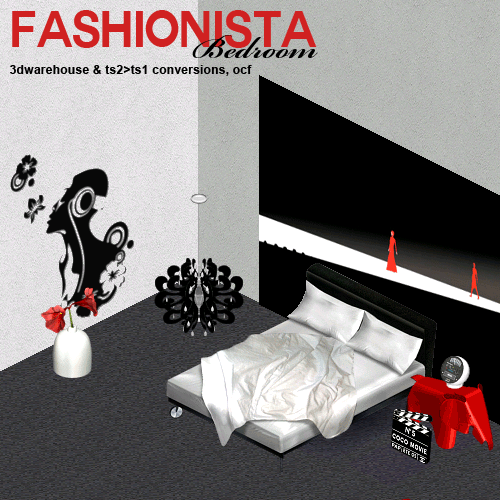 DOWNLOAD
Alternative link
Bed is semi-functional - usable, but not animated and sleeping Sims aren't visible. Not rug-based this time, because it was made ages ago - before I learned how to make rug-based beds (actually it is my very first finished bed). This is not a direct conversion of well known TS2 bed - I was able to find very similar free 3D-model and slightly edited it to resemble original as much as possible. A TS1 base is by Linda Celis @ Natural Elements, used with her permission. A thingy, which looks as electronic alarm clock, is a radio, it goes everywhere from floor to shelves and have all radio-stations included. Ceiling lamp is based on SSoW's Anywhere lamp, so it doesn't need floor support. An elephant is not just deco - it's a table. It is slightly oversized and bleeds a bit on some rotations.
Floor, used on a preview pic is by Nyx, wall - from my previous update.
Posted by olena at 12:57 AM

Olena, You are a legend! Thanks so much. I almost gave up on finding any sites who still do sims 1 CC. I really appreciate it.

HOW CAN I USE THAT?

HOW CAN I USE THAT?

If you cannot download any file from my site, please, report here

All my files are FSF, clonable and recolorable. You don't need my permission to make with them whatever you want. Just do not claim them as your own.